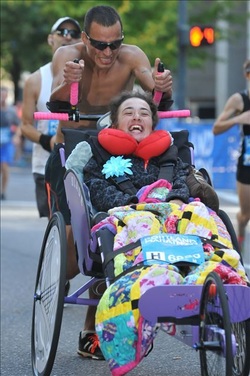 Andie's journey with running began in 2014. Up to this point, she was using a wheelchair to get around. She has muscular dystrophy which is a progressive muscle disease, however that didn't stop her from joining running groups and was inspired to get approved for a walker and went from walking down the block to building up to finishing her first 5k!

"I went out everyday working hard to train, I increased by a mile each day. I went out in all weather conditions, NOTHING could stop me. So 2014 I participated in my first 5k race heartbreaker here in Portland. I got out there and walked the entire race in 1 hour and 13 minutes," says Andie.

From that point going forward, she knew that running was something she wanted to continue doing. Since then, she's walked 10 races.

Although now with news from her doctors saying that she can no longer
walk races, she still continued to walk the Portland waterfront every single day (which is a 6 mile loop). She didn't let anything stop her. The true spirit of a RunJunkEe! She did this not just for herself, but to also inspire others to get up and get moving. Currently, due to her condition, she can no longer walk, but still has found a way to participate in races. Her local "Moms Run This Town" group offered to push her in a freedom chair so she could finish any race she desired.

During the summer a local race organization called Uberthons hosted a virtual race called the Andiethon, it raised over 5,000 people as far as Australia registered to help make this possible. They raised the funds and she was presented the custom made chair in August, just-in-time for the Portland Marathon! One of Andi's goals was to finish the Portland Marathon last summer and she dominated it with the help of a man who offered to push her throughout the whole 26.2 miles.

"Coming in towards the finish was a moment I'll never forget, the cheers the 'Go Andie' all of it brought tears to my eyes. It was a once in a life time experience all thanks to Brian! He is a hero in my eyes. Its a memory Ill cherish forever!," says Andie.

With her condition becoming worse, Andie is determined to continue sending the message that you can't let an illness or physical limitation stop you. You have to keep on going out there and chase your goals.

"This muscle disease may rob me from a lot physically, but the one thing it will never be able to steel is my strong spirit to keep going, my ability to love and inspire others to move forward, and never steal my smile," says Andie.

Going forward, she would love to race each distance again and to also host a group run around the Portland waterfront, her favorite place in order to raise donations for the muscular dystrophy association.

Andie  is an amazing and fearless example of the many awesome RunJunkEes Ambassadors we are lucky enough to have representing our club! You can follow her running adventures here through her Facebook page! 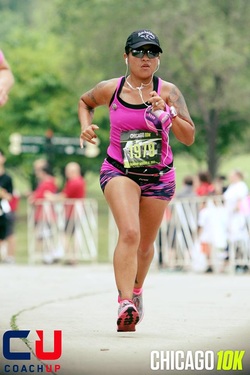 Jen is a loving stay-at-home mom who started her running career in April 2013. Before she fell in love with running, her goal was to lose weight after having her daughter in 2012. Her weight loss journey began with biking and doing smaller runs outside. In 2013, she signed up for her first race, the Cinco De Miler Race (she thought it was a 5k...but it was a 5 miler! Oops!) After crossing that finish line, she was officially hooked! She continued to run a number of other races and lost another 15lbs on top of the original 15lbs she lost before her first race! In 2014 she ran her first half marathon and last year, she made the giant leap and entered the lottery for the Bank of America Chicago Marathon and  on her birthday, she found out that she was in!

"Running a marathon has been my biggest accomplishment , although staying fit and at a stable weight has been another accomplishment for me . I am thankful to running for also allowing me to meet so many new friends who love running and inspire and motivate everyday."

Her son is even a little RunJunkEe in the making! He's been completely inspired by her running and has finished four 5ks with her.

Jen  is an amazing example of the many awesome RunJunkEes Ambassadors we are lucky enough to have representing our club! You can follow her running adventures here through her Facebook page! 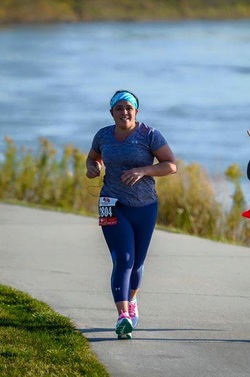 Caitlyn has proven to be such a great inspiration to all club members and has been running (long-distance) since May 2013. Her first half marathon was in July 2013 and she's been unstoppable ever since! Although her first half was in 2013, she has a long history of lacing up those running shoes. She ran the 200m & 400m sprint in track & field during high school. She LOATHED long-distance running pretty much all of her life until she decided to sign up and run her first half marathon in honor of her close friend’s mother who was an avid runner and had passed away of uterine cancer just months before she ran the race. Since then, she's finished 26 half marathons, 1 full marathon, a handful of 10-milers,10ks, and 1 5k! A true RunJunkEe!

Her favorite race: The Scheel’s Fargo Half Marathon (now known as the Forum Communication Fargo Half Marathon). "It was an amazingly flat course with so many awesome spectators throughout the neighborhoods (little old ladies had made cake and sweets for us and stood outside handing them out in their front yards plus there was a Bacon & Beer station) and the volunteers were so friendly and upbeat! Great expo and swag too!"

Caitlyn  is another example of the many awesome RunJunkEes Ambassadors we are lucky enough to have representing our club! You can follow her running adventures here through her Facebook page! 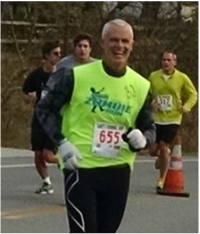 Rob Neeley, aka Rob "Zombie", hails from Oregon, Ohio. In Nov. 2014 Rob committed to running 30 races to celebrate his 30 years of running.  He also committed to fundraising for Mobile Meals of Toledo.  You can read all about Rob's accomplishments at 30races.com and be sure to check out his Facebook page.  Rob is just one example of the many awesome RunJunkEes Ambassadors we are lucky enough to have representing our club.